In the “Founding Declaration of the INITIATIVE of Communist and Workers’ Parties to study and elaborate European issues and to coordinate their activity” there are apparently some regulations and conditions difficult to digest for communist organisations in some countries of the European Union:

The following communist and workers' parties of the EU member states, associated related states, and other European countries, declare:

We support the principles of scientific socialism and are united by the vision of a society without the exploitation of man by man, without poverty, social injustice and imperialist wars.(...)

We consider that there is another development path for the peoples. The perspective of another Europe, the prosperity of the peoples, social progress, democratic rights, equal cooperation, peace, and socialism are highlighted through the workers' struggles.(....)

Every communist and workers' party from an EU member state or associated state, as well as from other European countries that accepts this Declaration and its conditions can participate in this INITIATIVE.

The goal of the INITIATIVE is to contribute to the research and study of issues concerning Europe, particularly concerning the EU, the political line which is drawn up in its framework and has an impact on the lives of the workers, as well as to assist the elaboration of joint positions of the parties and the coordination of their solidarity and their other activities.


It is remarkable that a vast region (Belgium, the Netherlands and Germany, and Luxemburg) have not any communist organisation which can join the INITIATIVE, while that region is surrounded by a vast European region which agree with that INITIATIVE and joined it (apart from Austria and Switzerland)!
At the other side have the communist organisations in the region Belgium, Luxemburg, Germany, the Netherlands less fundamental problems with European Left and is there no-significant difference with openly reformist organisations (the – Dutch- NCPN has no political answer on the –also Dutch - reformist SP), in fact there is a “friendly understanding” between 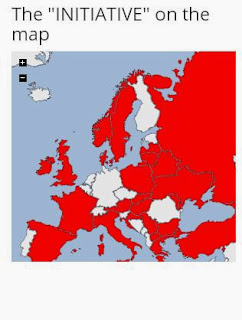 communist organisations AND reformists. The Belgian WPB invited people of the SP and Syriza on her initiated activity “Day Of Socialism” (and nobody of the equally Dutch NCPN or Greek KKE). In the German DKP exists no unified political line about revolutionary strategy and struggle against forms of opportunism and reformism. Although the DKP is within the International Communist Movement a “sister-party” of the KKE, a part of the leadership is openly in favour of Syriza, while another part is in favour of the point of view of the KKE about the reformist character of Syriza.


The least you can say is that as well as the NCPN (New Communist Party of the Netherlands as the communist party of Luxemburg and the German DKP are all very “contaminated” with opportunism, while revisionism turned the WPB into a reformist party. (some of my arguments you can find in articles on this page)
In fact are there more “joined declarations” of the DKP,WPB,NCPN and LCP (to find on the site of solidnet) than there exist mutual critic on respective capitulation before opportunism.

To be represented as region within the INITIATIVE, when there is no communist organisation available, would it possible to form an ad hoc regional “department of INITIATIVE by a group of persons out of that region who all accept the conditions of the INITIATIVE?

Some points out of the “Provisional operating framework” of the “INITIATIVE”, which seemed to be difficult to digest for the WPB, the NCPN, the DKP and the LCP:

The aim of the “PROVISIONAL OPERATING FRAMEWORK” of the “INITIATIVE” is the formulation of certain basic rules, which will be known and accepted by the parties which agreed with the Founding Declaration and participate in the “INITIATIVE of the communist and workers’ parties (...). The “Initiative” seeks to establish this cooperation amongst the CPs of Europe on more stable foundations.

The communist and workers’ parties form the “Initiative” on the specific text of the ‘’Founding Declaration”, while they also agree with the “Provisional Operating Framework”, which later will be corrected and will be enriched, on the basis of the experience that has been accumulated.

1. On the Character of the “Initiative”

The “Initiative” is a form of cooperation of communist and worker’s parties, above all in the member-states of the EU. It is based on a Founding Declaration, which describes its principles and goals. It does not constitute a unified political party, nor does it constitute a “European Party”, such as those established by the EU. (...)

2.1 Every Communist and Workers’ Party from an EU member-state can participate in the “Initiative”, as long as it agrees with the Founding Declaration and is not a full member of any “European Party”. (..)

2.8 If a Communist and Workers’ Party, which is a full member of the ELP (or another “European party”), assesses that it agrees with the Founding Declaration of the “Initiative” and wants to participate in it, it is sufficient for it to alters its membership of the ELP and to submit a request to enter the “Initiative”. The request is examined on the basis of the process which is described in the paragraphs above.

3. In relation to the functioning of the Full Plenum of the parties

5. In relation to the joint Founding Declaration, the symbols and joint actions of the “Initiative”

The parties that participate in the “Initiative” have accepted the Founding Declaration, which is integrated into the “Operating Framework”, while they can, on the basis of Unanimity, form further joint symbols, their own election declaration for the EU parliamentary elections, and announce their own campaigns as well. They can issue a common poster, determine certain joint slogans.


I think that this would be important to come to a real European vanguard organisation which will work in the whole European Union region, in order to mobilise and organise the European workers for a final overthrow of capitalism in Europe and building socialism as the first stage of communism.
I think, that based on article 2.8. a certain “organisation” who at the same time is declaring to be “a communist or workers' party” AND agree with the Founding Declaration and “provisional operating Framework” can (when accepted by the plenum of the INTIATIVE?) be a part of the “INITIATIVE of the Communist and worker' parties”.
Well, while there is no party in the region BeNeLux-Germany which want to be a part of the “INITIATIVE....”, I do an appeal on individual communists IN that region, to form a BeNeLux-German department of the INITIATIVE and to participate as such IN the INITIATIVE.
Whenever the Secretariat gets similar letters as mine from other communists in the BeNe Lux-German region, I propose that the Secretariat organises a meeting between them. Otherwise, I am ready to do this, under supervision of (or by reporting) the Secretariat.