About issues on the 19th Congress of the KKE

The Communist Party of Greece, the KKE held her 19th congress (11-14 April, 2013). Some of the treated topics or issues were:
- the importance of the struggle against opportunism
- the concern to develop a strategy for revolution and for the building a new working-class power and for the beginning of the development of new communist production-relations, based on concrete elaborated actualised analyses
- the sense of responsibility for the ideological and political struggle IN the international circle of organisations who claim to be “communist”, claim to“apply Marxism” in their analyses, claim to be in favour of “socialism” after a “socialist revolution”, or claim to be “anti-reformist”.
In fact as revolution, “building socialism”, as the first stage of communism, in “our time” of global imperialism, is not necessary “first within the borders of a by the bourgeois institutions recognized country or nation”, it means that the building of a anti-imperialist popular movement lead by the working class which is not only that of that respective “nation” or country) and with a working-class-vanguard organisation which is “composed” of vanguard-elements NOT only of one “nation” or “country. So is the struggle against opportunism to be conceived as an INSIDE struggle against opportunism IN the organised working-class-vanguard organisation. 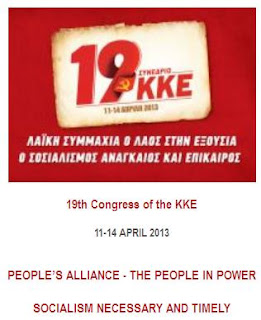 “The assessments of the outgoing CC of the party on the situation in the International Communist Movement and the corresponding activity of the party are presented in Theses 43,44,45,46,47. The following are noted here: “43. The party continued its efforts to deal with the crucial and major problems inherited from the victory of the counterrevolution, with the struggle against opportunism being the most basic element. The results are limited though this issue does not depend on the KKE but on the general situation of many communist parties in all continents and indeed of the parties in the powerful capitalist countries.
The class confrontations in Greece, the conflict with the capitalist employers, and the vanguard activity of the KKE have contributed to the development of reflection within many communist parties around the main issue i.e. what the political line should be for the activity of the communists in the conditions of the crisis. The reflection and the debate between different views show the significant contribution of the KKE along with other parties in order to substantiate the need to concentrate forces for the overthrow of the bourgeois power, for the struggle for socialism.
Thanks to the initiative of our party, as well as of other Communist Parties, the International Meetings of Communist and Workers’ Parties take place every year. In these meetings there is an ideological struggle against opportunism, reformism and various currents. In addition, there are Regional and Thematic Meetings of Communist Parties taking place and joint statements are being issued on current issues. A website of the Communist Parties (www.solidnet.org) is also functioning which has an incorporated system for the rapid exchange of information among them. There is also the publication of the “Information Bulletin” that contains the materials of the Meetings of the Communist Parties.
Nevertheless, these steps in the coordination cannot alter the main issue: the communist movement remains organisational and ideologically fragmented. It is experiencing a situation of a long-term ideological-political crisis that coexists with the corrosive activity of the strong opportunist current and the weaknesses of the Communist Parties that struggle on the basis of Marxism-Leninism. In the conditions of the crisis, of the new requirements for the communist movement, signs are emerging regarding a new retreat from treating the relevant problems from a class viewpoint.
44. There are CPs which under difficult conditions maintain a correct orientation in general, they fight against bourgeois ideology and opportunism and make efforts to work in the labour movement while facing serious weaknesses. (...)
In the countries which claim to be constructing socialism the KKE examines the developments according to the criteria of the laws of socialist construction, the working class power, the socialization of the means of production and central planning, the workers’ and social control. From this point of view, the KKE expresses both its concern about the strengthening of the capitalist relations of production in Vietnam and also its opposition to the so-called “market- socialism”.
In today’s China the CPC leads the capitalist path of development; it develops relations with the “Socialist International”. This course and generally the positions regarding a “mixed economy”, which was previously supported by social democracy, regarding “market socialism” exert a negative influence on the communist movement; they are utilized in a multifaceted way against it.
Some Communist Parties, which have distanced themselves from Marxism-Leninism, present China as a “model of socialist development”.
45. The KKE, without giving up on the existing forms of cooperation and coordination of the Communist Parties, is oriented to the effort to form a communist pole among the communist parties which defend Marxism-Leninism, the existence of the socialist construction and its contribution, but also recognize its fundamental mistakes that led to its overthrow, the necessity of the struggle for the overthrow of capitalism and the construction of socialism.
The journal “International Communist Review” (ICR) was founded in this direction on the basis of a framework of common principles –starting from a first discussion in Athens at the end of 2008 and in Istanbul in 2009- currently with the participation of eleven theoretical and political journals of Communist parties. The aim of the ICR is to discuss ideological and theoretical issues and to contribute to the formation of a unified revolutionary strategy of the CP so that the international communist movement gets out of the situation of the ideological-political and organizational crisis.
The KKE considers as its duty and obligation the development of the ideological and political struggle, at an international level as well, against the opportunist forces (European Left Party- left “networks”), the forces of social democracy, the Trotskyite forces, which exert an ideological and political impact on the international communist movement.
46. Certain crucial issues that concern the confrontation inside the communist movement:

Sharing the same concern of struggle against opportunism....

I - being not a member of the KKE, so not bound to hold my critic and remarks for just INTERNAL discussions – like to participate in the analysis of the danger of opportunism. I am concerned that there should be no underestimation of that opportunism. I want to emphasize the danger of not recognized (and so not fought)opportunism WITHIN the revolutionary (communist) organisation or party. Because MY OWN experience is that existing and not detected opportunism can be “used” to let enter and to let develop REVISIONISM (BOURGEOIS ideology and BOURGEOIS capitalism protecting strategy formulated in Marxist-SOUNDING phrases) IN the organisation or party. Existing and not fought opportunism will be “used” to mislead members and cadres, who are perhaps themselves somehow “trapped” in some opportunism, so that the whole organisation or party will become a REFORMIST organisation.
There are material reasons for that (as I see it) underestimation of the danger of opportunism. I think for example, that just because of the concrete historical origins of the KKE that differs with a lot of other “communist” parties and organisation in the “circles in which the KKE is working,discussing, analysing”.... The KKE is a real revolutionary party, basing herself on (in a perhaps actualised concrete way) the “Bolshevik (Leninist) party-principles as the CPSU and is a party originating of the Third International. So the struggle against revisionism was done INSIDE the organisation and has “revolutionised” that organisation. A lot of (claiming-to-be) communist organisations are “New” CP's founded more or less outside the considered as totally revisionist “Old” CP.
At the other hand it is important to study the analyses and the positions of the KKE (as for example her congress-documents) because they have a value which goes further than only “her own organisation” and “her own members and cadres”.
Referring to “MY OWN EXPERIENCE”....
The Workers Party of Belgium was such a “New” CP founded on the struggle against revisionism, whereby the “Old” Communist Party of Belgium was considered as totally overwhelmed by revisionism and a “New” Communist Party had to be built. FROM THE BEGINNING, certain forms of opportunism were NOT fought by the whole organisation. Only its president, Ludo Martens, was able to formulate self-critics and was able to analyse false developments and was able to stimulate “struggle between two lines” and was warning CONTINUALLY against the danger of revisionism which could develop on not detected and not fought opportunism. Probably he was surrounded by a leadership of which certain elements already quickly ideologically changed class-position and became “hidden” revisionists.....For me, Boudewijn Deckers is such an example. And the developments in the WPB show now that also Herwig Lerouge and Jo Cottenier – having co-founded AMADA and later on the WPB – must have become rather quickly “hidden” but convinced BOURGEOIS elements. An example of a cadre ( who also co-founded AMADA and later the WPB who was “blind” for development of opportunism – perhaps “trapped” in some opportunism and so was not able to counter politically and ideologically the conscious revisionists, is Kris Hertogen. .....Also myself I was

influenced by some opportunism (forms of dogmatism I should say) until 2000 where I came aware of revisionist developments in the WPB. By analysing and reporting these revisionist developments I could free myself of that dogmatism......but in 2005 I was expelled out of the WPB
As the WPB is (still) been seen - and internationally she is “promoting” herself as such – as a “communist” organisation belonging to the circle of “communist parties and workers parties, I will use the texts of the WPB published on www.solidnet.org (HERE) or articles of cadres of the WPB in The International Communist Review as that of Peter Mertens HERE, to prove that the WPB is NOT anymore a revolutionary communist party with which there can be discussion “among comrades” and differences of opinion “searching her own way to develop a revolutionary strategy”. The WPB has become a “renegade” organisation (“renegade” as Lenin described Karl Kautsky and the parties who were -still – in the Second International during the first World War) Its revisionism has to be unmasked and the WPB has to be used as “teacher of the negative example”. That would be – at least for me - the best way to honour the remembrance of the Ludo Martens, who passed away on 5 June 2011..


1http://inter.kke.gr/News/2013-04-02-info-19congress/, The KKE is marching to its 19th Congress… -ARTICLE OF THE INTERNATIONAL RELATIONS SECTION OF THE CC OF THE KKE”