Not (just) the national implemented “austerity-plans” are the problems, GLOBAL IMPERIALISM is the problem.

In fact what is happening in Greece is what has happened in a similar way in what ever was called “the countries of the Third World”. Massive loans were “given” for investment in production (and for buying machinery and products in the imperialist countries so increasing THEIR Gross Domestic Product or THEIR economic growth so “solve” the overcapacity-crisis)  which would realise a growth in GDP  IN those “third world countries” with which those loans could be paid off (so was supposed by the governments of those “third world-countries).
But a certain moment because of the overcapacity-crisis (which just “seemed” to be solved by massive credit for consumption), the growth of the debt still to be paid was bigger than the growth of the GDP. The big international concerns and groups of banks began to fear that there would be  a moment of payment-failure.  In order to get their money (rent and capital) they pressed those “third world-countries” to increase the level of exploitation of their workers: in all kind of austerity-plans, deterioration of social security, health-care, social housing, unemployment payments.... That was what all those “dictators” (but good disciples of the IMF and banc-consortia) did in order to pay off existing loans and at the same time get new loans for investment.

So in for example Tunisia the annual growth-rate of GDP was/is decreasing (because of the global overcapacity-crisis) but the external debt/GDP is (still) increasing, whereby the former government of Ben Ali was praised by the IMF for its “measures” of austerity..
So what the working class in Greece is feeling of “austerity-plans”, the working class of the most countries of Africa (and so also of NORTH-Africa - which were last year revolting against dictators which were “just” doing what IMF ordered them to do), America and Asia have experienced it since the seventies and the eighties....... 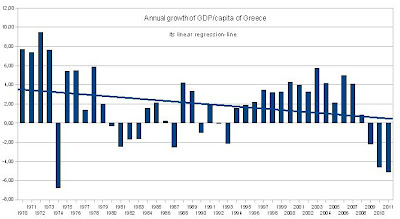 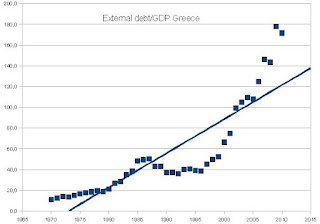 But increase of the level of exploitation on the (own) working-class (by wage-DEcreases, deterioration of all kind of social programs, “pension-plans”...) as it happened in the eighties in the USA, is since the “fall of socialism” and the founding of the European Union put on the agenda of all the member-states-governments of the EU.(you can read here my argumentation for this)

So the COMMON (and MAIN-)“problem” of working-class in the countries in the part of the world still suffering colonialist production-relations of imperialism, of the working class in the countries now integrated in imperialist centres (as Greece in the European Union and Mexico in the NAFTA....) and even that same MAIN-problem of the working class in the “leading” countries of those imperialist centres (Germany in the EU and the USA in the NAFTA) now ALSO suffering of by the European monopoly-bourgeoisie IMPOSED increases of level of exploitation, is CAPITALISM (in its IMPERIALIST stage).

And actually, capitalism is NOT organised on NATIONAL scale anymore, so revolution does not has to be LIMITED by national borders.
So revolutionary strategy has to be developed on the biggest possible scale, DISregarding limiting “National” borders, so on EUROPEAN scale in the European Union .(and similarly an All Arab revolution or a Pan-African or pan-American revolution...)...

And when revolution is “propagated” in (member-)state by (member-)state, by which the working class of “other” (member-)state are just called “to watch”, to “express solidarity” and mobilised to perhaps “copy” the example of the working-class of the respective other (member-)state revolting against the increase of level of exploitation imposed by SUPRA-national “state-” instruments or financial institutions of global monopolies, an artificial division is brought within the working class and means that their possible revolutionary force is being weakened in advance.

The responsibility of whoever claims to be “working class vanguard”
The Greek Communists (KKE) develop a opportunism which lead to reformist positions:

Aleka Papariga, GS of the CC of the KKE, participated in the strike rally of PAME in Athens and made this statement to the mass media: “ Even if the workers give their own flesh to pay off the debt, the savage bankruptcy will not be averted. Consequently, there is one solution: Disengagement from the EU and unilateral cancellation of the debt, This is the solution, anything else will constitute a tragedy for the workers.” (...)We do not owe anything! We will not pay! The debt is not ours! It must be paid by those who created it, by the plutocracy! This is the truth which was proclaimed by the protesters against the lies of the government of the Black Front (centre-left, centre-right, nationalists) and the slanders unleashed by several international media which present the Greek working people as being lazy.[1]

By another “left tendency” (calling itself “International Marxist Tendency”,  on marxist.com), the “critic” on the positions of the KKE is only formulated in the following terms:

The only thing that stands between the working class and power is the lack of leadership. The polls indicate that the Left parties (Synaspismos, KKE and the Democratic Left) have over 40%. This shows that the working class is looking to the Left to solve its problems. But sectarian tactics prevents them from uniting for action. The KKE refuses to engage with other Left parties. They even called a separate demonstration on Sunday.
That is a fatal mistake. The working class demands united action against the capitalist class and a genuine socialist policy! What is required is the application of the Leninist policy of the United Front. Such a policy and programme would be sufficient to sweep the bourgeois parties into the dustbin of history where they belong.[2]

For the rest they offer no real alternative to the opportunist political line of the KKE. In fact they are pleading for struggling for “a socialist revolution in Greece” and in the same time recognizing that “socialism in one country is a reactionary utopia”.....:

“In order to free the Greek economy from the stranglehold of foreign Capital, all debts must be repudiated and there should be a state monopoly of foreign trade. Drastic revolutionary measures should be taken against speculators and people who send their wealth abroad.
These are the prior conditions, without which no solution is possible. However, even these steps will not be enough. Under modern conditions, no country can save itself on purely national lines. Socialism in one country is a reactionary utopia, as the experience of the USSR and China clearly show. A socialist Greece should make an appeal to the workers of Europe to follow its example: throw off the yoke of Capital and unite in a European Socialist Federation, built on the solid foundations of equality and solidarity.”[3]

As one of the reasons of existence of the EU is forcing as much as possible an increase of level of exploitation by the whole European working class (to “help” the monopolies in the sharp competition in a time of structural overcapacity), the different measures in the respective member-states has to be seen as parts of an imposed policy by the non-voted, but installed institutions of the EU (the way how the dictatorship of the bourgeoisie is taking shape)[4].

So the only solution is, breaking this bourgeois dictatorship by taking the power  by an on European scale organised working class, taking the control over all the aspects of the economy, the “ownership” of the “means of productions” by beginning to take over the control over all resources-delivering sites (harbours, with their base-industrial sites, all the refineries, .....), expropriating all energy-plants and energy-network, all transport and logistics......and this in the whole European area. Only an (on European scale) organised working-class can develop enough force to resist to the probably violent reaction of the probably well-armed forces of the European monopoly-bourgeoisie.

Remark: The facts used for the graphs I made came from