Most important reason of EXISTENCE of the EU: increasing continually the level of exploitation of the European workers.

Karl Marx:“The wealth of those societies in which the capitalist mode of production prevails, presents itself as ―an immense accumulation of commodities, its unit being a single commodity. Our investigation must therefore begin with the analysis of a commodity[1]”.
The analysis of a commmodity, it is presumed to be known, otherwise best to be red in the book “Capital” itself.
But I think that there is a Bourgeois economic concept which (only) illutrates reasonally well the “accumulation of commodities” and that is Gross Domestic Product (GDP). And when I am right, GDP is the accumulation in one year – in a country, in a continent or in the whole world of products and services, produced in that country, continent or in the world and sold at their prices).
Evolution of GDP (of the World or here the EU) gives an image of the condition of capitalism
Since say 1974, (the so-called “oil crisis”), global imperialism is in a structural overcapacity-crisis. Allthough competition can -for imperialists – solve temprary that problem (by destruction of capacity – best when it is  forced by the competitor of course). De falling demand, because of the impoverishment of the workers is temporarely “solved” by allowing to pay with your future income (credit). But this makes life more expensive because together with the price of the product, an interest has to be paid (on the cedit). The continued increase of GDP (and increase of the growth itself) , since WO II stopped. See the grafic 1 that shows the decrease of the growth of the GDP (until 2007). 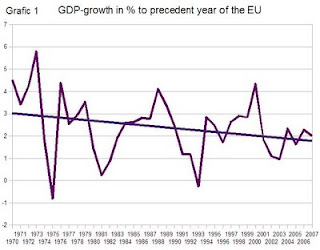 It is clear that the overall decrease of the GDP-growth is continuing after 2007.(see grafic 2) Allthough capitalism has perfectioned the CAPACITY of the production of “wealth”, and the possibility or the CAPACITY (when that wealth would be distributed among the people) of continued increase of GDP/cap, it becomes clear that capitalism has reached the limits of its possibilities. (see grafic 3) 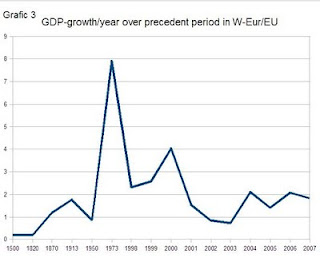 You see the effect of capitalism on “accumulation of commodities” (illustrated by GDP) from the beginning of capitalist development and the change into imperialism and  the effect of the 2 world-wars. Then you can see the enormous growth, in the years after WO II (with of course the effect of influx of extra-surplusvalue build on extra-exploitation of the workers in the “Third World” - the effect of colonialism), then the outbreak of the crisis in 1973-1980, with some conjunctural hiccups but a fundamental decrease of the GDP-growth/cap.
Of course this is NOT what each person (cap) is possesing or owning of that GDP. In fact, the TOTALITY of the World-GDP is initially in posession of or owned by the capitalists and “can” -if there is enough purchasing power – be BOUGHT. The GDP/Cap is theoretically what could be distributed equally to everyone. Of that enormous amount of “commodities” a part has to be spent for the “cost of wages“, the payment of the workers involved in the production. In the cost of wages is included all payment of social security.
All what increase the payment for the cost of wages (in what form ever) is decreasing the  amount of surplus-value.
Because, since the outbreak of the crisis in 1974 the overall RATE of GROWTH of  GDP is decreasing, (because the crisis there is development of overcapacity, which means existing production-capacty not to be used, because of deminishing capacity to BUY by the people (allthough the NEEDS are NOT decreasing) So overcapacity means a decrease of general purchasing power but NOT a decrease of general NEEDS.
Because there is a tendency, by the capitalists, even in a period of overcapacity to increase the surplus-value, the capitalists are pressing for an increase of the rate of exploitation (higher productivity or less wage).
Less wage means less components of that wage: so ALSO less social security (pensions, health care,....) You see that (grafic 4)althtough there is (temporarily) from 1991 until 2006 in the EU a slight growth of GDP, in the same period the “social expenditure” is decreasing – and so the level of exploitation is INCREASING.
Increasing the level of exploitation of the European workers is the FIRST reason of existence of the EU
Increasing the level of exploitation (and decreasing the “social expenditure” is one aspect of it) is the overall policy of the EU. Because the EU is the state-instrument of the (european part of the) capitalists in its monopolist (imperialist) stage.
The grafic 4 of a (still) growth of GDP against a decrease of “social expenditure” is made based on documents of the EU itself. 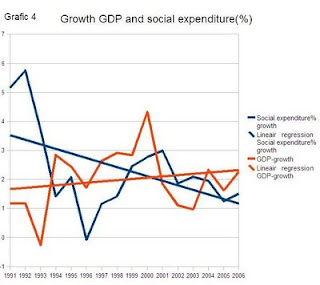 Allthough GDP is still increasing, there is less growth. Therefore (to maintain the same level of surplus-value extracted out of the workforces) the ESSENTIALS of Europe's policy  is to raise the level of exploitation of the workers and so increase the productivity and decrease the payment for the workforce (wage and  taxes on wages, and all contribution for vital - vital for the workers - services and funds.
And so you see that “social expenditure” is already decreasing (grafic 5)a long time, before the ACTUAL austerity-plans everywhere in Europe. 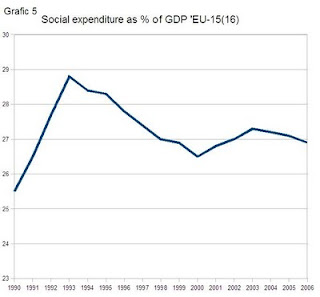 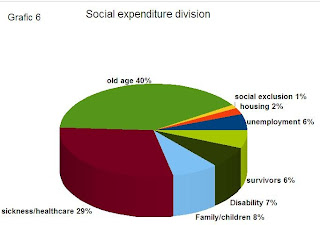 As you can see (in grafic 6) is “pensions” the biggest part of “social expenditure”.So that is the reason that EVERYWHERE in Europe, member-state governements are implementing pension-plans which has one objective: lessen the needed funds out of which pensions has to be paid. (and THAT is the objective for example for the “increase of the age of pension”)
You see for yourself that “sickness/healthcare” will be subject of the next attack. And the “disability-plans” in the member-states where those are strongly developed (as WAS the case in the Netherlands before the annulation of the “Wet ArbeidsOngeschiktheid” (WAO) and IS now the case of Belgium with its developed system of “brugpensioen”)
Also in the memberstates where there is (still) a good sistem of “replacing income in case of unemployment”, this will be under attack.
The overall already since long time decrease of social expenditure is the result of the already implemented austerity plans (like those in Germany on, for example, “unemployment”)
The essentials behind the decrease of social expenditure: decrease of cost of wages in all its aspects. That is what Marx called: increasing the level of exploitation
And when social expenditure is decreasing..... the social protection RECEIPTS can decrease also,...and that is another wish of the capitalists.
You can see that in the whole EU there are similar systems of social protection receipts.(grafic 7) 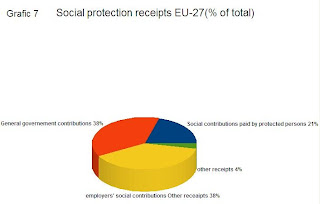 They were the “gift” of the capitalists after the Second World War to the workers so that their class-struggle would not develop in a revolutionary direction to change the base of the system. (the example of the Soviet Union was close, and there was a lot of sympathy of the workers for that alternative system. The system of social receipts for the development of a system of social expenditure is principally the same in whole Europe.
But concretely each nation (or what now is a member-state of the EU) had his “own” system. So now it just looks like as if it is just the respective member-state's “national governement” who is....
-         limiting unemployment-payment in the time,
-         lowering the payment as alternative income in case of unemployment as well,
-         sometimes increase the age of pension,
-         or stopping all possibility of “disability-subsidy” (sometimes called “pre-pension” or in Dutch “brugpensioen”).
But it is all part of the overall policy of the state of the European monopoly-capitalists: increasing the level of exploitation.
And this can only be stopped if the European working class decides to break the power of those monopoly-capitalists, expropriationg them and to build a socialist planeconomy that produces in function of real NEEDS.
Fighting (in defense) against deterioration of once achieved reforms AND then just in each member-state of the EU apart AND NOT building of ONE European workers mass-struggle-organisation with an anti-imperialist program of “expropriating” all privatised sectors and former (member-)state-enterprises or -services and all monopolies and monopoly-capital financial institutions to make of them unified public European enterprises under control of a voted, working and periodical public justifying “parliament” (with abolishing of all installed but non-voted European institutions,.... is what Lenin called “economism”.
Of course this includes the building of ONE European organisation of the van-guard of the working-class a European Communist Party (and NOT a multitude of “national” -member-state communist parties).
(the data on which the grafics are based you can find them on: Eurostat Website: http://ec.europa.eu/eurostat or on the site of OECD)
[1]             The beginning of the book of Karl Marx “Capital -A Critique of Political Economy, Volume I, Book One: The Process of Production of Capital”.
Gepost door Nico op 06:57