These conclusions were made in the document I made, which you can read here -as pdf-file.
Conclusions
Increasing the level of exploitation of the European workers is the FIRST reason of existence of the EU
Increasing the level of exploitation (and decreasing the “social expenditure” is one aspect of it) is the overall policy of the EU. Because the EU is the state-instrument of the (european part of the) capitalists in its monopolist (imperialist) stage. 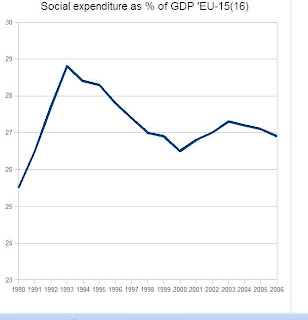 The grafic of a (still) growth of GDP against a decrease of “social expenditure” is made based on documents of the EU itself.
Allthough GDP is still increasing, there is less growth. Therefore (to maintain the same level of surplus-value extracted out of the workforces) the ESSENTIALS of Europe's policy is to raise the level of exploitation of the workers and so increase the productivity and decrease the payment for the workforce (wage and taxes on wages, and all contribution for vital (vital for the workers)servicas and funds.
And so you see that social expenditure is already decreasing a long time, before the ACTUAL austerity-plans everywhere in Europe. 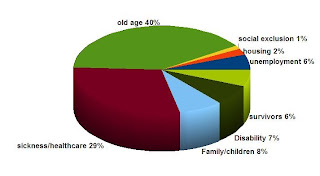 As you can see (in the first “pie-figure) is “pensions” the biggest part of “social expenditure”.So that is the reason that EVERYWHERE in Europe, member-state governements are implementing pensionplans that has one objective: lessen the needed funds out of which pensions has to be paid. (and THAT is the objective for example for the increase of the age of pension)
You see for yourself that “sickness/healthcare”is subject of the next attack. And the “disability-plans” in the member-states where it is strongly developed (as WAS the case in the Netherlands before the annulation of the “Wet ArbeidsOngeschiktheid” (WAO) and IS now the case of Belgium with its developed system of “brugpensioen”)
Also in the memberstates where there is (still) a good sistem of replacing income in case of unemployment, this will be under attack.
The overall already since long time decrease of social expenditure is the result of the already implemented austerity plans (like those in Germany on for example “unemployment”)
The essentials behind the decrease of social expenditure: decrease of cost of wages in all its aspects. That is what Marx called: increasing the level of exploitation
And when social expenditure is decreasing..... the social protection RECEIPTS can decrease also,...and that is another wish of the capitalists.
You can see that in the whole EU there are similar systems of social protection receipts. 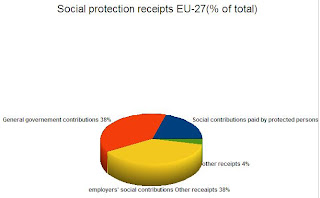 They were the “gift” of the capitalists after the Second World War to the workers so that their class-struggle would not develop in a revolutionary direction to change the base of the system. (the example of the Soviet Union was close, and there was a lot of sympathy of the workers for that alternative system. The system of social receipts for the development of a system of social expenditure is principally the same in whole Europe. But concretely each nation (or what now is a member-state of the EU) had his “own” system. So now it just looks like as if it are the respective member-state “national governements” who are....
But it is all part of the overall policy of the state of the European monopoly-capitalists: increasing the level of exploitation.
And this can only be stopped if the European working class decides to break the power of those monopoly-capitalists, expropriationg them and to build a socialist planeconomy that produces in function of real NEEDS.
Fighting (in defense) against deterioration of once achieved reforms AND then just in each member-state of the EU apart AND NOT building of ONE European workers mass-struggle-organisation with an anti-imperialist program of “expropriating” all privatised sectors and former (member-)state-enterprises or -services and all monopolies and monopoly-capital financial institutions to make of them unified public European enterprises under control of a voted, working and periodical public justifying “parliament” (with abolishing of all installed but non-voted European institutions is what Lenin called “economism”. Of course this includes the building of ONE European organisation of the van-guard of the working-class a European Communist Party (and NOT a multitude of “national” -member-state communist parties).

(the data on which the grafics are based you can find them on: Eurostat Website: http://ec.europa.eu/eurostat or on the site of OECD)
Gepost door Nico op 03:51