For a coalition/coordination of all (real) communists in the “low lands at the sea” (Belgium, the Netherlands and Luxemburg)

Whatever quote of Marx, Lenin or even of Stalin or Mao SEEMS to prove that a communist party in the first place (even combined with the argument “always propagating the necessity of socialism”) is suggesting a program of “radical” reforms to the working class involved in class-struggle, it is a practice of economism, the argumentation is dogmatist.


We can “support” each struggle against deterioration of wage or working condition, but we have to make clear that such a fight will has to be done constantly because each time new measures..... so fundamentally it has to be a struggle against capitalism. And propagating “only” struggle against the “latest” austerity measure of the “actual” government, and “only” proposing a “alternative” measure which would “only made pay the rich”, is using the spontaneous struggle is for opportunist economism, or serves a “promotion-campagne” for the own “image” of the organisation (for electoral purposes or for a parliamentary “opposition”-strategy)

For example the WPB/PVDA/PTB: “Our Congress reaffirms that “Every struggle for social and democratic improvements can take two different roads: either it reinforces the system and the dictatorship of the monopolies, or it manages to make large groups of people rise up, equipped with a new vision and energy. That way, they will reject the idea that the contemporary world is the only one possible. They will become able to create a better world.”1
There are in fact no “struggles for social and democratic improvements” . There are continuous struggles against NEW austerity measures and NEW other measures to increase the level of exploitation. The real “social and democratic improvements” are concessions of the bourgeoisie to a class-struggle which gets revolutionary aspects. These “concessions” are always linked to repression on the leaders of the class-struggle and laws against all kinds of aspects of class-struggle
So each “social and democratic improvement” is a by-product of class-struggle which is becoming “dangerously” radical (Dangerously for the bourgeoisie....) .(as Lenin is ALSO saying)
Every real communist party in the first place is making propaganda and agitation in all the possible ways (illegal when it must, legal when it is possible) for the need of revolutionary struggle and how it will go as concretely as possible.

The arguments raised (in a dogmatic way):
“While communists fight right-wing opportunism, they have to be vigilant in face of the danger of left-wing opportunism. It is wrong to treat daily struggles for immediate demands with contempt. Communists place themselves in the tradition of Marx, Lenin and the First and Third International.
In the struggle with Proudhon, Bakunin and the Lassallians, Marx stressed the importance of immediate demands, even though he believed revolution was close. At the first congress of the International in 1866 in Geneva, the Proudhonists were defeated.
The congress voted in favor of the struggle for an 8-hour working day as an international demand, and in 1871 the representatives of the First International led the first demonstration for an 8-hour day in New York. In his Critique of the Gotha Program, Marx offers a virulent criticism of the “iron law” of Lassalle, who wanted to conduct only political struggles.
At the foundation of the Bolshevik party in 1903, in a period of increasing class struggle, Lenin adapted tactics to strategy, taking care closely to link the immediate political and economic demands and the immediate task of smashing tsarist autocracy with the ultimate perspective of socialist revolution. The aborted revolution of December 1905 was preceded by a year full of protests and strikes in the whole of Russia, for civil liberties, salary increases, land distribution, the 8-hour work-day and the convocation of a Constituent Assembly elected by universal suffrage. .2 “

Marx argued in a period where the achievements had to be won, today we are in a situation that already OBTAINED achievements are now (since say 1980) one by one taken away. And those “once obtained achievements” were the result of a class struggle which endangers the domination of the bourgeoisie AND the result of the existing of the USSR. So those achievements where a kind of concessions to “temper” the class struggle. So MORE was on the agenda of the class struggle than was finally OBTAINED as “achievements”.
Lenin (in 1903) argued in a period that FIRST the bourgeois-revolution (on tsarism) had to be done. And the working class had to link their class-interests to that bourgeois revolution, because the bourgeoisie would never go to the end with THEIR OWN revolution. But it was in the interests of the working class to go to the very end of the bourgeois-revolution, IN PERSPECTIVE to go then further with their OWN (socialist) revolution.
Today, there is no other revolution on the agenda then the socialist revolution!

For a better life, better housing, enough and healthy food, “cheap” and “clean” energy and drinking water, for a clean environment (so for all the “social en democratic achievements”)and not only here but also in the places in the world where most resources are coming from (under colonialist-like conditions), FIRST another production-system and other production-relations have to be installed.
The production-, energy-, resources-refining, the distribution-, logistical-, facilities (mostly in hands of monopoly-capitalists) have to be expropriated and a workers-power has to be installed. Otherwise a real production in function of NEEDS (and which is not based on exploitation of the workforces) can not be installed.


221st International Communist Seminar , Brussels, 18-20 May 2012 www.icsbrussels.org – ics@icsbrussels.org “The relation between the immediate tasks of communists and their struggle for socialism - General Conclusions” (20 May 2012)
Gepost door Nico op 11:58 Geen opmerkingen: 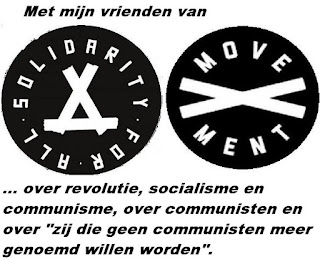