In the last letter/mail, or rather in the document attached to it, I gave my arguments about my statement that many, themselves presenting as communist organisations, are - to my opinion - "contaminated" with some forms of opportunism. I gave the Greek KKE as example. 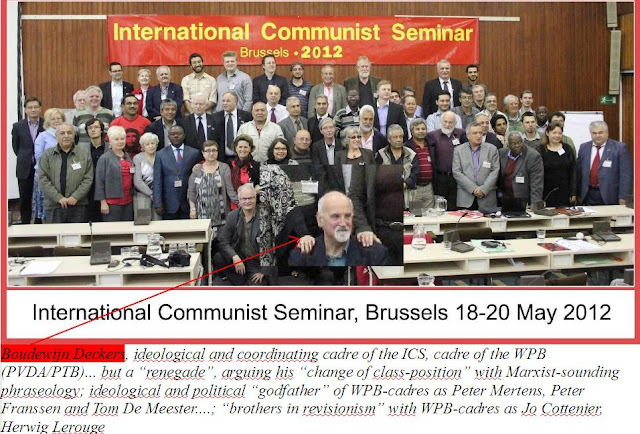 It is my own experience, being once member/militant of the Workers Party of Belgium (WPB see pvda.be or ptb.be) that, when such opportunism is not detected and fought (by internal study, discussion and by what is called "struggle between two lines"), "renegade"-cadres (cadres or militants who "change class-position") developed INSIDE the party a conscious REVISIONIST line based on those not-detected opportunist conceptions so being able to change the party from a revolutionary party into a reformist party. While the WPB is for me such a "teacher of the negative example", I take one cadre (namely Boudewijn Deckers, who is also a "respected" ideologue of the ICS) of the WPB as an example of someone who "changed class-position" and can argue this with Marxist-sounding phraseology... and not noticed by the majority of the members or other cadres.

This happens today, but this happened also in the past. And when we don't learn from the past, we are forced "to repeat" her....
While I was wondering how much communist parties (of which I studied their analyses) had “problems” with a correct (and “opportunism”-free) applying of Marxism, I came at the end to the analysis which I put in a pdf-file as an attachment to this letter/mail.

I hope I can contribute in the ideological and political discussion in order to come to a CONCRETE and ELABORATED revolutionary strategy, an unmasking of opportunism and revisionism and to correct organisational principles.

I have in the passed five, six years (that is in the time that I have been expelled from the Workers Party of Belgium (WPB, pvda.be/ ptb.be) analysed what I consider being the development of opportunism in the WPB and the deterioration of the WPB into a REFORMIST party.

I think that the WPB is to consider as “teacher of the negative example”.
At the other hand I made some analyses about the political line of the Greek KKE. At this moment it is my opinion that the KKE is making some opportunist “mistakes” which are resembling the opportunist mistakes which the WPB was making before the “coup” of some revisionist cadres in 2004, which lead to her actual reformist political line, “affirmed” on her 8th congress in 2008.

I am considering the KKE as an example of the danger of when you are NOT recognising and fighting opportunism in your organisation, the danger of REFORMISM (defended by Marxist-sounding phraseology) is real.

Some points of view of how I am thinking about revolutionary strategy, you can find here.

I hope that I can stimulate some discussion about how to come to the necessary revolutionary strategy which has now to be developed, among all those who consider themselves as the vanguard of the working class or as communist or revolutionary.

Always ready for discussion I am greeting you now,
Nico Oldenhof
nico.oldenhof@gmail.com
PS. In attachment in a pdf-file my latest point of view
Gepost door Nico op 06:49 Geen opmerkingen: